The Rosberg X Racing duo of Johan Kristoffersson and Molly Taylor made motorsport history as they set the pace right from the beginning despite the rugged terrain and the intense heat. This was the first race in a series of five (locations ranging from the Arctic to the Amazon; the next race is in Senegal in May), and every team had to field a male and female driver.

Extreme E enlisted Zenith as Official Timekeeper and Founding Partner of electric off-road racing series. This pioneering international off-road racing series uses spec electric SUVs –Odyssey 21 and aims to raise awareness of the environmental consequences of desertification and climate change. Alejandro Agag, Founder and CEO of Extreme E, said, “The margin of success in motorsport has always been measured against the stopwatch, and that’s why I’m delighted that Zenith is Official Timekeeper and Founding Partner. Zenith is a master of accuracy and recognised worldwide for timing and excellence. With only milliseconds the difference between victory and defeat, we can rely on Zenith’s chronometric precision throughout our first season of Extreme E.”

Julien Tornare, CEO of Zenith, added, “Building a green and sustainable future is something very much at the core of what Zenith is doing today. It’s exciting to be at the start of what will undoubtedly become the future of off-road extreme racing while also bringing environmental issues to the forefront. When developing our next collection (unveiling later this week), this is exactly the kind of environment we envisioned for it: Innovative, off the beaten path and pushing the limits of performance to the extreme, where every millisecond counts and every racer can make their mark.” 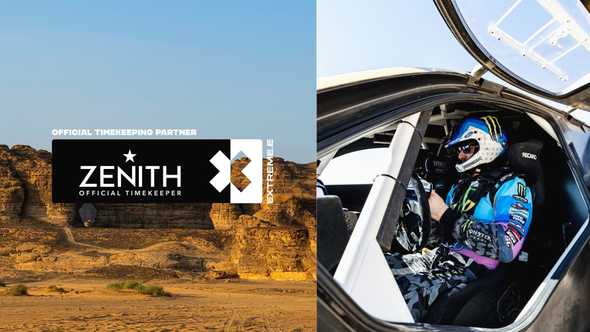