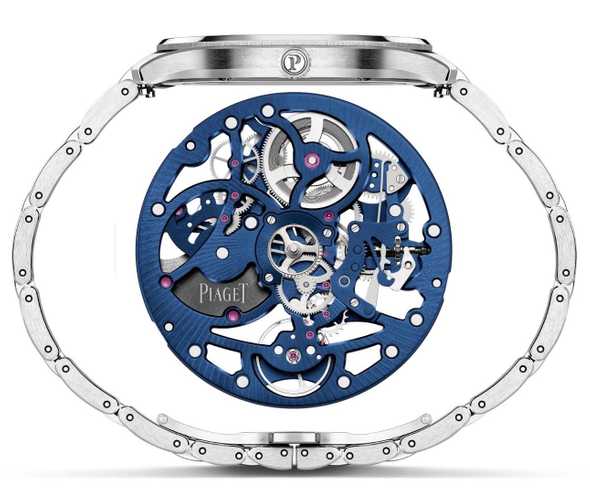 There are few more nuanced expressions of horological art than the ‘skeletonised’ watch. This intricate reduction of dials and movements to their bare minimum reveals the true, beating heart of a watch in all its mechanical glory. The Piaget Polo Skeleton is one such work of art.

The first Piaget skeleton watches made an appearance in the 1970s, and one of the most noted early adopters was the jazz trumpet legend Miles Davis who wore a gold Piaget skeleton during many of his major performances. In 2021 Piaget’s latest adventure in skeleton watchmaking has taken the shape of a fully skeletonised version of its celebrated Piaget Polo, created in 1979.

In its creation, Piaget’s designers and engineers had to keep in focus the key aspects of the Piaget Polo that have made it instantly recognisable - i curved case surmounted by a round bezel, cushion-shaped dial opening and slim profile. The new Polo Skeleton required the case to be 30 per cent thinner than existing versions and an evolution of the Piaget 1200S self-winding skeleton movement powered by an off-centre micro-rotor engraved with Piaget coat of arms.

The result is nothing short of a wearable work of art. The 42mm steel-cased sports watch is ust 6.5mm thick, and is powered by Piaget’s 1200S1 self-winding, manufacture movement. The movement is wafer-like 2.4mm thin. It has 44 hours of power reserve and is water-resistant to three atmospheres.

Additionally, the polished and satin-finished ‘H’ design integrated bracelet has been revised. It now has an interchangeable function: for the leather strap, lending an extra dimension to the Piaget Polo Skeleton’s already distinctive character.